What Is Sourdough Bread? 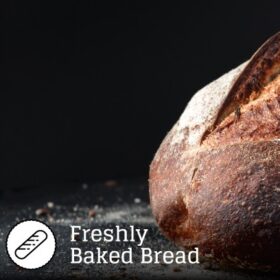 Sourdough is one of the oldest forms of grain fermentation. It’s believed to have originated in ancient Egypt around 1,500 BC and remained the customary form of bread leavening until baker’s yeast replaced it a few century’s ago.

A leavened bread is a bread whose dough rises during the bread-making process as a result of gas being produced as the grain ferments. Most leavened breads use commercial baker’s yeast to help the dough rise. However, traditional sourdough fermentation relies on “wild yeast” and lactic acid bacteria that are naturally present in flour to leaven the bread.

Wild yeast is more resistant to acidic conditions than baker’s yeast. This is what allows it to work together with lactic acid-producing bacteria to help the dough rise. Lactic acid bacteria can be found in several other fermented foots, including yogurt, kefir, pickles, sauerkraut and kimchi.

The mix of wild yeast, lactic acid bacteria, flour and water used to make sourdough bread is called a “starter.” During the bread-making process, the starter ferments the sugars in the dough, helping the bread rise and acquire its characteristic taste. Sourdough bread takes much longer to ferment and rise than other types of bread, which is what creates its particular texture.

To this day, making sourdough bread remains popular in Mediterranean and Middle Eastern countries, as well as in the San Francisco Bay region of the US. Some store-bought sourdough breads are not made using the traditional sourdough method, thereby reducing their health benefits. However here at Dinkin’s Bakery we pride ourselves in making sourdough bread the ‘authentic true’ way. Our artisan bakers, look after the starter on a daily basis, feeding it and looking after it with the care it needs in order to produce the finest tasting sourdough. 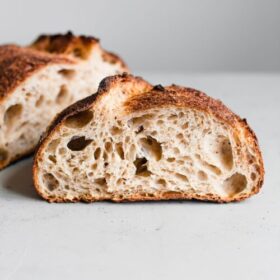 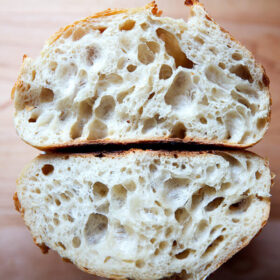 What are the top 5 health benefits of sourdough bread? 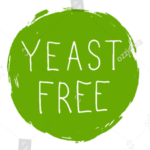 Although the beneficial microbes in the starter tend to be lost during the baking process, the fibre and plant compounds, called polyphenols, become more bio-available. These act as an important fuel source for our gut microbes, which makes sourdough bread a gut-friendly choice

The fermentation process and higher fibre content makes sourdough a useful option for those with blood sugar management issues. This is because, unlike many commercially produced breads, sourdough has less of an impact on blood sugar levels.

Typically, diets high in fibre are associated with a lower risk of heart disease. Sourdough appears to offer additional benefits thanks to the fermentation process.

Traditional sourdough undergoes a slow fermentation process, the result of which is an increase in the bioavailability of the bread’s vitamins and minerals. This process also starts the breakdown of protein (including gluten), making sourdough easier to digest.

Research suggests that the fermentation process improves the bioavailability of fibre and minerals. This is because a naturally occurring compound found in grains, called phytic acid, is broken down and this enables us to access the grain’s nutrients more readily.

Is sourdough safe for everyone?

Sourdough is a leavened bread, which means the dough naturally rises as a result of gas which is produced as the grain ferments. While most commercial breads use baker’s yeast as the raising agent, sourdough is made using a sourdough starter.

For those following a gluten-free diet, such as those with coeliac disease, sourdough made from wheat, rye, barley or other gluten-containing grains should be avoided. Otherwise if you are looking to try a healthy nutritious bread option, why not try Dinkin’s World Bread Winning Sourdough?